Day in the sun

I probably talk about the weather too much on here, or at least refer to it too much, but that is an ingrained British thing really! Anyway, we've had some gorgeous weather this weekend and I was able to indulge myself with a whole day beading out in the garden.

The garden bench works a lot better than my actual studio desk, it is much bigger and I can really space out - and I can make more of a mess without having to worry about hoovering up tiny chips of metal ;)

I've been working away on new designs and also a very special custom order which I shall be blogging about more when I am finished.

I have a new pair of earrings my Etsy shop, Summer Fruit earrings - lovely juicy red and delicate peach earrings with silver - inspired a little by the Eton Mess pudding I made yesterday. I have also got another bracelet to add to my Tropics Collection, pictures to be added later in the week when I am finished.

For now I am hoping the good weather lasts until next weekend, we are hoping for a little wander around the Suffolk coast.

I've been working hard on a new summer collection recently and the bright colours inspired meto name it 'Tropics.'

I have added new pieces this weekend including my signature Tropics Earrings.

To celebrate I am offering 15% off all items in the Tropics Collection until Friday.

Prices are already adjusted in my Etsy shop, so you can shop away with ease!
Thanks so much for looking, I hope to bring you new pieces all summer long. I've been obsessing lately over gorgeous ways to pack my orders, I rarely stay on the same theme for long because I am forever tempted by pretty ribbon, boxes and bakers twine.

I made this treasury featuring some of my favourite packaging finds on Etsy. I've been good so far but I think I may have to order some new things to package up my orders, so check back soon for new packaging (hopefully!).

You can see the treasury here and click through to the links on Etsy - http://www.etsy.com/treasury_list_west.php?room_id=53800

I got a lot done on the jewellery front this weekend, fuelled mainly by a batch of long awaited cupcakes. I haven't made cupcakes successfully* for about two years, since my cupcake tins were lost during a house move. I kept forgetting to buy new ones, but I finally picked up some at the weekend and realised just exactly what I had been missing!

In an old oven like ours, where cakes take an age to cook through, cupcakes are just the right thing, they cook quickly and properly in about 15minutes, perfect. There isn't a recipe per se for these as I made it up as I went along!

I had a bit of cocoa, a bit of dark chocolate and some coffee in the cupboard that I wanted to use.

I used a standard Victoria sponge recipe, 100g each of butter, sugar and self raising flour and two eggs. It makes quite a thick mixture so it is ideal for adding things too without making the mixture too runny. I added three tablespoons of coffee (2 teaspoons of instant dissolved in a tiny bit of hot water), about 3 tablespoons of cocoa and some chunks of about 100g chocolate cut into pieces. Mixed it up and spooned about a tablespoon in to 12 cupcake cases, gas mark 5 for about 15minutes and they were all done!

I lacked ingredients for icing but they would be perfect with a bit of buttercream on top.

* My unsuccessful attempt involved me thinking that cupcake cases wedged closely together on a baking tray would be absolutely fine. Result - lots of cake batter spilling out of cake cases and onto my tin - not good! You need proper cupcake tins. 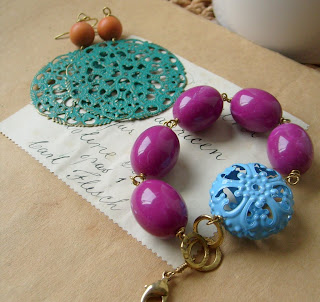 I've been working on another new piece for the shop which has inspired me to create a new collection for the summer. My new Tahiti Bracelet is part of my 'Tropics Collection' - this collection also includes my 'Sienna Earrings.' Lots of new pieces will be added all the way through the Summer! 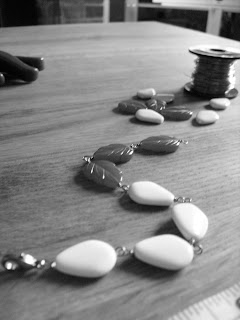 I also have a special running in my Etsy shop this weekend, 10% off all purchases, see my shop for more details. I have a pair of eyecatching earrings made with the teal filigrees and the rust lucite beads above in the shop right now. Sienna Earrings - in my Etsy shop.
I'll be listing a beautiful magenta and blue filigree bracelet later on today too!

PS - my spring sale ends today, all of my sale items are a wonderful 50% off normal price. Mention 'blog' in the 'message to seller' box and I'll give you free shipping!

After a short spell away my button shop is open again! 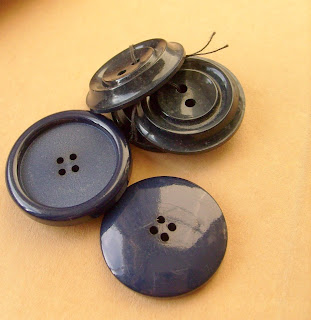 I have finally got myself organised enough to reopen it and this time it comes with beads too.

I'll be selling off the rest of my button stash along with some of the vintage beads that I have been hoarding for too long - they have spent too long not being used so I must pass them on!

I'll be listing often so keep checking back, enjoy!

I am currently obsessing over these fabulous handmade goodies, and wishing I didn't have quite so many sensible things to buy and more money to spend on extravagant purchases. Limited Edition Japan inspired caramels by Galipette
Includes black sesame flavour - I can't imagine what they taste like but I am sure they are wonderful. Also so happy to have found a caramel shop that ships to the UK! Blooming Birch Ring by kyleannemetals
Temptingly these rings come in lots of different finishes, I love the pink on this ring. Unisex teal felt wallet by banoo
Anything in teal always gets my vote!

Hope you enjoy my picks, hopefully I'll be able to buy some of them soon and then blog again about how great they are ;)

PSST : I have 50% off all my sale items in my Etsy shop this week - buy something from me and I can buy sweeties!