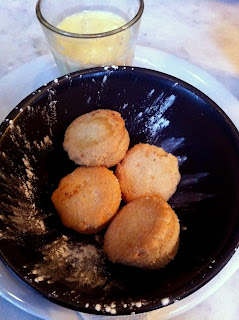 Earlier this month I was very lucky to win the competition on Kavey Eats for a Christmas Feast for 2 at Dishoom (named from the comedy 'dishoom' punching noise you so often get in Bollywood fight scenes). I've seen lots of tweets about how great Dishoom is, and I have spent time drooling (and reminiscing) over the menu on their website. So I was really excited to win the prize, plus I never win anything!

The menu is a mixture of Christmassy items (turkey, mince pies, warm spiced pimms) and classic Indian dishes (bhel puri, roti and naan, dhal and chai). Everything was beautifully spiced, just the right amount of heat and lots of aromatic spices, and authentic too but with a little twist. 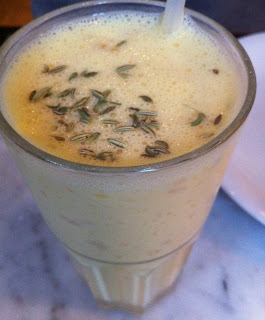 We started off with a Winter Pimms for me and a Mango and Fennel Lassi for Mr. Giraffe. The pimms was like Christmas in a glass - lightly spiced with a dash of calvados and apple juice. The fennel with the mango lassi was surprisingly excellent, not overpowering at all, it worked just right. 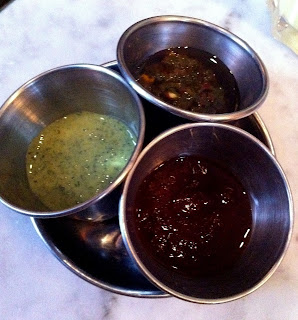 First up we were served a selection of chutneys to go with our meal. Tamarind chutney, a cooling yoghurt and mint raita and a very hot house made chilli chutney. 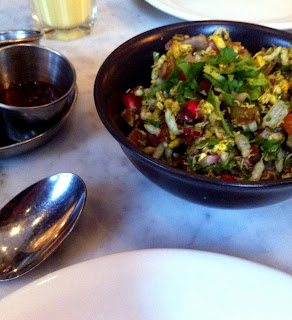 Next up, bhel puri. This is one of my favourite things to eat in the world ever, everyone should have this at least once in my life - either made by my Mum or at Dishoom - I get the pleasure of being able to try both! Bhel is a mixture of puffed rice, spiced chickpeas, onion, lots of coriander and tamarind chutney. Sometimes with potato as well. At Dishoom the bhel had roasted crunchy chickpeas (a nice alternative to the normal kind) and pomegranate seeds which gave a lovely sweet flavour and extra crunch. I wanted to lick the bowl clean but we were in a public place, so I didn't. 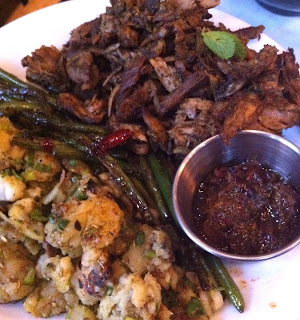 The mains all came at once so at this point we definitely felt like we were feasting! The centrepiece was the 'flaming turkey raan'. A whole turkey leg slow roasted with spices and then shredded, served with crispy crushed Bombay potatoes and charred chilli green beans. Everyone should cook turkey like this.
We also had a lovely vegetable biryani and an amazing deeply savoury and excellently spiced black dhal. . We were also given a selection of roti and naan, all house made, I could see the man at the other side of the restaurant shaping and cooking them fresh to order. 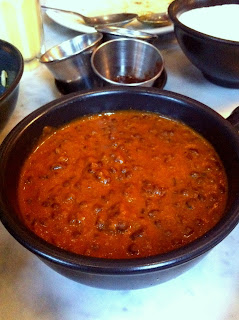 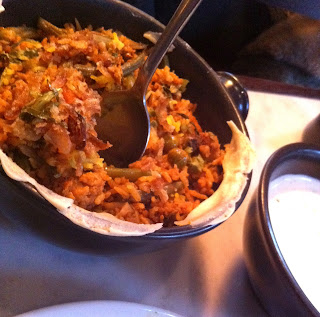 All the food is perfectly spiced, nothing is just pure heat, it is spiced too - quite a different thing and hard to achieve well. 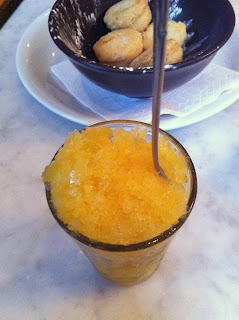 Pudding was some chilli mince pies, lovely crumbly pastry with rich mincemeat and flecks of red chilli, served with spiced custard, yummy! We also had a passionfruit 'gola ice' which was lovely shards of fruity ice, perfect to cool off after the mains. 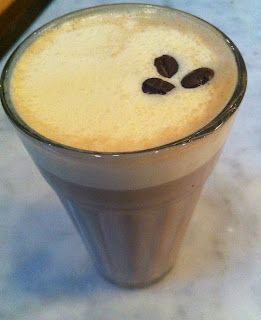 We finished up with chai, naturally. I had a Baileys chai which does an amazing job of warming you right through. Mr. Giraffe had an ordinary chai which was pretty authentic, and lovely.

We'll definitely be coming back to Dishoom for their normal menu. The bhel puri and the house dhal are worth going back for alone.  The Christmas menu is served until the 24th December, so hurry!

Thanks so much for having us Dishoom, we had a great time trying your menu out! 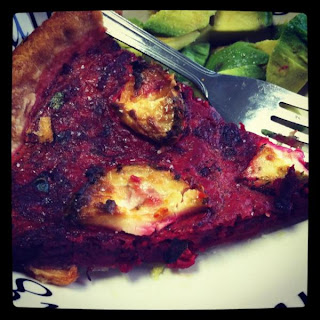 What is the difference between a savoury tart and a quiche? Something I am sure you will all ponder over for many hours...

This is a terribly simple recipe which not only looks impressive (purple food always does) but tastes brilliant too. If you cheat and buy pastry (I'm not telling anyone) then it is even easier.

I have discovered some wonderful goats cheese recently, from the excellently named Wobbly Bottom Farm, they do a range of goats and cow cheeses made from goats and cows on their own farm. My favourites are the soft flavoured goats cheeses, rolled in all manner of lovely things such as piri piri seasoning, black pepper or herbs. Yummy!
For my readers in Cambridge, they sometimes appear at local markets but the cheese is also stocked at the Cambridge Farmers Market outlet on the corner of Lensfield Road/Regent Street.

First of all either make your pastry, or roll out a sheet of bought shortcrust pastry. Oil or butter your tin, mine was non stick anyway but I have pastry paranoia so I greased it anyway. And then line your tart tin with your pastry. Leave about 1.5 inches overhanging, line with tin foil and fill with dry beans or rice. Blind bake for 15 minutes at gas mark 5 / 180c.

Whilst the pastry blind bakes make your filling.
For the filling you'll need:

Whisk your eggs in a bowl and then mix in your milk. Then add in the rest of the ingredients except the goats cheese and stir to combine.
Remove the pastry from the oven when it is light golden brown and nearly cooked all over (keep the oven on), remove the beans/rice and the foil. Whilst it is still fairly warm trim the excess pastry from the edge of the tin. Leave to cool slightly for 5 minutes before adding your filling in, hot pastry and cold eggs don't mix too well! Scatter the crumbled goats cheese over the top of the tart, or slice into rounds and place on top.

Return to the oven for 15- 20 minutes until the mixture has a slight wobble in the centre, but is cooked everywhere else. Cool for as long as you can bear before eating it!

P.S. I am sorry for the Instagrammed photos, normal properly taken photos will return some day, probably when the light levels are better.