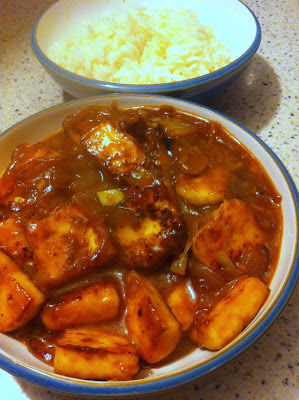 'This is the best thing you've ever made,' was the comment from the Mr about this chilli paneer, so despite the really quite terrible photograph I took hastily (because I wanted to hurry up and eat), I have decided that I really ought to blog this recipe. I haven't received a review like that in a long time.

Chilli Paneer is one of those things I've eaten quite a bit of but never really known what goes into it or how it is made - only recently did I realise it was Indo-Chinese-ish as it has soy sauce in it. The Indian part is made up of the paneer cheese and the rest are ingredients used in both countries (garlic, ginger, chilli, onion).

It differs from the Indian style muttar paneer which has more tomato in it along with the traditional spices - garam masala, turmeric, cumin, coriander. This version is a lot simpler and the soy sauce gives it a rich flavour without too much faffing about with lots of ingredients. In India we had 'Manchurian Paneer' which is another Indo-Chinese dish, it was deep fried crispy paneer in a rich dark sauce - I think with five spice and soy - with lots of spring onion and ginger, something I want to recreate, although I think without the deep frying.

This is very easy to put together and you'll probably have most of the ingredients already. Serve with basmati rice or naan, pitta, roti or other flat bread. Most of the recipes I came across also contained bell pepper, I'm not a huge fan of these and I didn't have any, so I didn't put any in. If you like them add one diced pepper in with the onion.

1. Dice up your paneer and then toss it in some seasoned cornflour. In a large saucepan shallow fry the pieces in a small amount of oil til golden brown on all sides, do this in batches if you don't have room. Remove and drain on kitchen paper.

2. Add the onions and pepper if using and fry in the oil til quite soft, add a pinch of salt to stop them burning and to realise the juices, it should take about 5 minutes for them to soften. Whilst they are frying mix the tomato puree and dark soy sauce, then add boiling water til it is the consistency of single cream.

3. Add in the ginger, garlic and chilli flakes to the saucepan and fry for a minute. Lower the heat and add the tomato soy sauce mix and then the paneer. Stir to combine everything and keep on a medium heat to simmer gently.

4. The sauce will start to thicken now, because of the cornflour in the paneer, add more water if the sauce starts to reduce too much. Simmer for about 10 minutes on a medium heat, stirring and checking the sauce. Season to taste, add more chilli flakes or soy if necessary and serve.