Twitter is a great place, it is where I nearly always hear about new restaurant openings and where I heard about The Cambridge Brewhouse. I'd heard whisperings a few weeks before, and then Cambridge News picked up on it and by opening night on Wednesday Twitter was awash with pictures of their delicious food.

The Cambridge Brewhouse is on 1 King Street, which is a pub that has suffered from being not that great. It was The Bun Shop for a long time, a shabby looking place which never really held any appeal for me, then just over a year ago it was refurbished and turned into The Jolly Scholar - I blogged about it back then - the food was okay and the service was really quite terrible. I heard many more bad reviews about it after that, and it closed last year.

So now is the turn of The Cambridge Brewhouse, and things are definitely looking up. They brew their own beer as well as having a selection of ales from independent brewers, they smoke their own cheese and meat and make their own sausages. The food is pub style with a twist and they do a selection of 'British Tapas' - little light bites to go with your beer or as a starter. 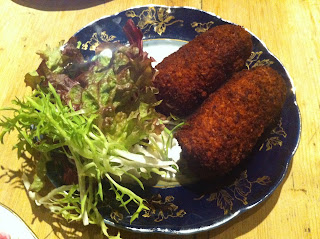 I started off with some Shepherd's Pie Croquettes which aren't the most photogenic things, but they were tasty. Very crispy on the outside with soft centre made up of mash and traditional lamb shepherd's pie filling. I would have liked the mash to be around the outside and a meat filling in the centre but the Mr did point out the logistics of this might have been pretty hard to achieve. So I'm just fussy.

There are a few vegetarian options on the menu, from either the tapas section or the mains, and you can have sandwiches in the day time too. Mr had a butternut squash pearl barley risotto served with a little pot of the house smoked cheddar. Again, it wasn't too photogenic (hence no picture) but it was delicious, nice and generous on the cheese and lots of herbs to go with the squash and pearl barley. 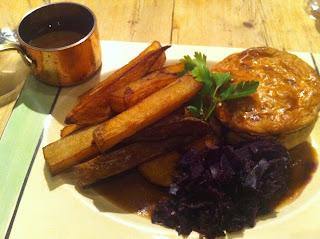 I had the pie of the day which was lamb and rosemary - served with either mash or chips and red cabbage, and importantly - extra gravy! The pastry was crispy and flaky and the filling slow cooked and tender, perfect. The chips were unfortunately a little bit soggy, only a few of them were crispy. 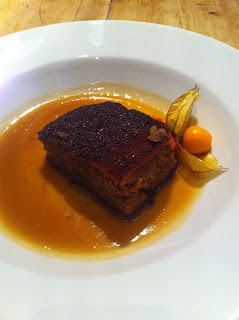 Feeling full we almost didn't have pudding, but all the food was 50% off for the soft launch, so it would have been rude not to. I had my favourite - Sticky Toffee Pudding which was sickly, sweet, sticky and perfect. It didn't look as drenched in sauce as others do, so I was worried it would be dry, but the sponge was perfectly soft and there was plenty of sauce to go with it. 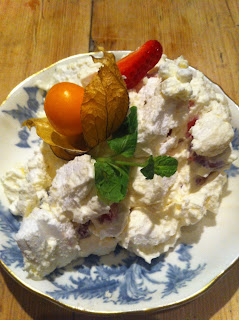 Mr had the 'Winter Berry Eton Mess' - as far as we could tell it came with raspberries, which aren't particularly wintry, and in fact there are no berries around in the winter anyway. Maybe a winter Eton mess would be better if it was served with stewed or preserved fruit of some kind. Despite the fruit, the meringue was chewy and crispy, it had a generous amount of cream and the out of season raspberries were at least sweet.

With 50% off a beer and a glass of wine it came to £23, so at normal prices it is about average for a meal in Cambridge (I know, it is expensive here!). We'll definitely go back again, the food is interesting and I like that they have their own microbrewery and smokery.