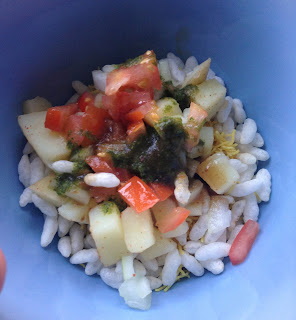 Hands down, bhel puri is my favourite savoury thing to eat. Closely followed by pani puri and then from a completely different culture - macaroni and cheese.

Bhel Puri is a type of Chaat - which is simply savoury snacks sold at the roadside all over India, but many associate them with cities like Mumbai and Delhi. I love the origin of the word chaat.

You can also buy (or make yourself) chaat masala which is made up of amchoor (dried mango) powder, black salt, coriander, ginger, salt, pepper, asafoedita and chilli powder. This is used in all kinds of chaat to easily season, plus it tastes great! Add it to your next chickpea curry. 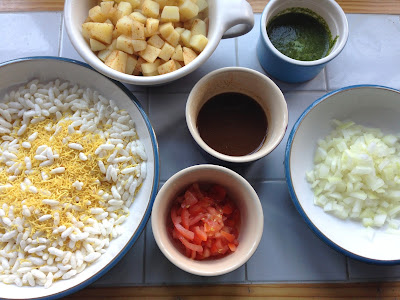 Bhel puri offers everything - it is a Gujarati snack made popular in Mumbai by migrants to the city-  it's crispy, crunchy, soft, sweet, savoury, spicy and sharp. The base is a mixture of puffed rice (mamra) and fried chickpea noodles (sev) which is then topped with chopped onion, sometimes tomato, boiled spicy potato (often with chaat masala), mint chilli coriander chutney and tamarind chutney. You mix it all together and eat it up immediately whilst it is still crunchy. Fancier versions I've had, at Dishoom for example, also contain pomegranate or diced mango.

As I've said, it is traditionally a snack, but if you love it like I do, it's more than ok to eat three portions and call it dinner. You'll find sev, mamra and tamarind in most Indian grocers and also very large branches of the main supermarkets. If not The Asian Cookshop has everything you'll need, and their delivery charges aren't too dear.

Tamarind can be bought in a large scary looking block, which needs to be soaked and then passed through a sieve, it is a bit of work but you can freeze the resulting paste and take out as needed. You can also buy jars of tamarind paste in most supermarkets, but it often has added ingredients.

Bhel Puri Serves 2 generously for dinner, 4 for a snack

Blend all the ingredients in a food processor - you want a thin sauce, a bit like salsa.

Add all the ingredients to a saucepan and simmer over a medium high heat til boiling. Turn down and then simmer gently for 5-10 minutes til it thickens to just a little thinner than ketchup.

To Serve
When serving put all your separate ingredients in to bowls and then let diners make their own bhel puri by piling up ingredients and chutneys to taste in a bowl.


I'll be serving bhel puri plus plenty of other yummy things at my upcoming Gujarati Supperclub in Cambridge in August, dates to be announced soon - sign up to the mailing list here.